Here are the photos of the game last night. 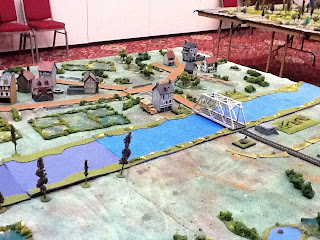 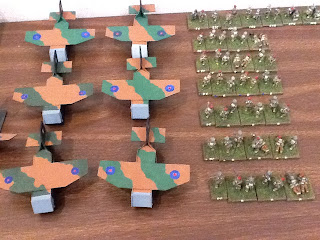 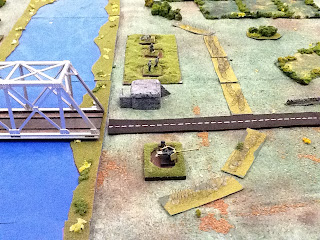 The Defenders of the West End of the Bridge 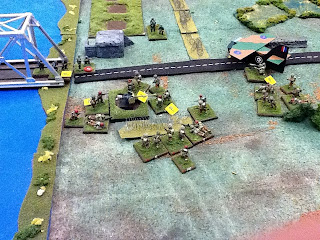 The Battle on the West End of the Bridge 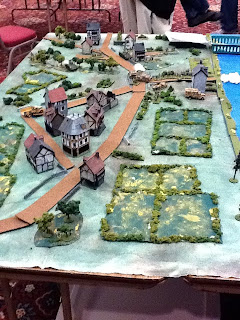 The Next Battlefield
Posted by Mark Decoteau at 20:41 No comments:

I hosted a 20mm World War Two game last night. The scenario was Pegasus Bridge, June 6, 1944. The game was played by four players who had only limited CROSSFIRE gaming experience (if any). Overall the game went pretty well. It ended in a draw when the Germans blew-up the bridge. I think that if the same players commanded in this scenario again things would be much different. Everyone who played learned more about the rules all through the game and by the end they were getting pretty comfortable with the game system.

The game started with the British players landing their gliders. For some reason one of the commanders tried to land two gliders in a small pond on the LZ - and he succeeded both times! It took over half the game to sort out the crashes. The other commander massed his platoons and prepared to assault the German pillbox, thus securing the West end of the Canal Bridge. Unfortunately for the Brits, the luck of the die was with the Germans and the assaulting troops were wiped out. It took several initiatives for the Paras to recover and they finally took the pillbox and killed Germans on the West side of the Canal. While the British Paras were trying to secure the West end of the bridge, the Germans moved their engineers onto the bridge and prepped it for demolition. The Brits assaulted onto the bridge, but the charges were set and the Brits were blown up as the bridge disappeared into a cloud of smoke and flying debris! First time ever the bridge has been blown in this game. No DSO for Major Howard and no Iron Cross for the German Company Commander! The game ended in a draw.

One of the outcomes of the battle was the set up for a follow-on game with the British trying to take the town of Benouville and set up a replacement for the Pegasus Bridge. It should provide some interesting challenges for both sides.

I took some pictures of the game and will add them in a little while.
Posted by Mark Decoteau at 19:52 No comments: