Here are some photos of aircraft that I completed since the start of the COVID 19 situation.  I have really gotten back to my hobby desk as of late and hopefully this is the first of several posts as I complete some long dormant projects and get started on other efforts.

Good start to the year.  At the moment, I have several things on the painting table, including the other three Stormovik's.  These three will be in some form of winter camp scheme but I don't know exactly what they will end up being.

Almost six months since my last post!  It doesn't seem possible.  But I am re-committing to posting my hobby activities in the coming weeks.  As a start, I will post my activities from 2019:

Not that many new 28mm figures, but I sure did get quite a few rebased (at least for me).  The biggest new addition was the Blood Red Skies game system and related aircraft that I got painted.  That will hopefully continue into the new year.

As I write this we are starting the fourth week of the COVID 19 Pandemic.  Governments are warning that the next two weeks will be the most difficult - which is a very sobering statement given what we have already been through.  I will try to continue to hobby and post what I am getting done.  Hopefully, the activity will help both you and I mentally to get through this very trying time in our lives.
Posted by Mark Decoteau at 11:19 2 comments:

Over the past week I have had an opportunity to play two games of Iron Cross WWII. Both of them turned out very well.

The first game was at our monthly club game night hosted by my friend Charlie G.  The battle was an infantry and armor assault by New Zealand and Indian forces against the town of Cassino being defended by Falschirmjagers.

Here are some photos of the game

The Allied attack developed slowly with the Indian units pushing in from the German left flank.  The New Zealanders moved very slowly but kept some pressure on the German front.  Being the first to attack, the Indians paid a heavy price as two machine gun squads tore into them.  Just as the Indian attack started to falter, one of the New Zealand companies rushed the right front part of the German defense and made it into the cover of some ruins without any casualties.  At the same time the Armor Platoon made a move up their right flank in an effort to assist the Indians.  The bold move did cost the tankers one Sherman as they advanced, but they pressed the attack.  Once the armor made it to the German flank, the Green Devils were not able to hit either of the remaining metal monsters with effective AT fire and the German AT gun position could not pivot to bring fire on the enemy.  In the end the AT position was destroyed giving the Allies a minor victory.  The win did cost the Allies dearly with almost two companies rendered combat ineffective and 1/3 of the armor force destroyed.

In the second game I had friends visit the house.  Andrew, his son Thomas and their friend Shaun visited and I set up a German vs British scenario to let them play the game for the first time.  Shaun and Thomas played with a couple of reinforced platoons against Andrew and I pushing British Commandos supported by a some armor assets.  The forces were exactly equal in numbers and composition.

Here are some photos of the game in progress:


This was a pretty one-sided game as Shaun and Thomas handed Andrew and I a real drubbing.  They had a better plan than we did; they moved better than we did; and they rolled their dice lights-out.  We played along the long axis of the table - and that made it a much more of a slugging match.  Not much room for maneuver.  But the Germans made the most of the terrain and with a slow advance by us British, the game was one-sided.

I'd like to highlight the game mat that we used for this game.  It is my new Killing Fields Static Grass mat that I just purchased.  I love the way the looks and mixes in with my other terrain and buildings.  If you like it, check out the Killing Field site HERE to get your own.

Club members and my friends really enjoy Iron Cross for our WWII skirmish/tactical gaming.  It is fast paced and the ability to distribute command tokens and activate units in any way during a turn makes players fully engaged in the game at all times.  I highly recommend that if you have an opportunity to play Iron Cross that you give it a try.

I recently had a chance to play a game of Volley & Bayonet hosted by my friend Ed.  This was a concept test for his modifications to Volley & Bayonet in Wing/Battalion Scale.  Ed has been working on this particular edit of the base rules for a couple of years now to use his incredible Austrian and Hungarian armies for mid-19th Century European conflicts.  I think that his edits are right on the mark as the game seemed to flow well tactically and was a lot of fun to play.

During this game I faced off against fell Conspirator and blogger, AJ.  AJ has written an excellent review of the game on his blog at this link (look for the entry "Battle of the Bloggers") so I will not go into the details of the game.  I agree with everything that AJ has outlined in his post.

I did take a few of my own pics of the game in progress so here they are:


My pictures of the game cannot do justice to the beautiful figures that Ed has collected for this set of rules and period.  I encourage everyone to visit Ed's Blog here and scroll down to see closeups of the armies and the many different conversions he has put together.  Really an interesting read.

Many thanks to Ed for hosting such a great game and the work he has put into coming up with great rules for the period.  Also, a big shoutout to AJ for being a great adversary across the game table.  I look forward to playing the game again soon.
Posted by Mark Decoteau at 21:31 1 comment:

The game system I have been working on the most lately is the relatively new WWII Aerial Combat rules from Warlord Games called Blood Red Skies (BRS).  I have played a few sets of air combat games in the past and quite frankly I found most to be 'fiddly'.

I think the cliche of a game mechanic being 'elegant' is overused recently.  But I have to say, that is the most appropriate word for BRS that I can think of as I play it.  The combination of cards, pilot skill, boom chits and plane status is simple but gives a real feel for the descriptions I have read of air to air combat in WWII.

Here is a very good summary of the game mechanics that I found on the RPG.net website here.  I think it really captures the essence of the system and I have to agree with most of his conclusions on the game.  This is a relatively easy review, however, having been done in November, 2018.  In December a full BRS Rulebook titled Ground Attack (yeah, I don't get it either but that is Warlord Games for you!) is due out.  The new book will bring all rules together in one place - not three - and will incorporate all of the FAQ comments and addendums that have come out over the past couple of years.  Sort of like a Version 2.0 of the rules without the fanfare.  Ground Attack will also introduce rules for bombing (including dive-bombing) and strafing.  These were major components of the air conflict in WWII and so it will be beneficial to have these aspects addressed with official rules.

Like all modern gaming systems, BRS has wealth of social media support including the Facebook Page called the Ready Room.  If you use FB, look at the Ready Room and you will find some really neat ideas and supports for the game.

So one of the best parts of the game is that it has given me the opportunity to collect and paint new forces for my game room display!  Here are a few of the planes I have painted and there are several more on the painting table as I write this so stand-by for more!

So that is my introduction of the new game system.  I hope to host a couple of games at Adlernest Hobby Store on November 9th so be on the lookout for a battle report or two in the coming weeks.

Posted by Mark Decoteau at 23:41 No comments:

New Game Mat for the Table

I recently invested in one of the new mats from Killing Fields Battle Mats company.  It arrived last week and I have to say that it is just as advertised.  Here are some photos to show you what the mat looks like.  I will comment more on the mat as I use it in games.

The mat is approximately 4' by 6' and although it had some ripples in it from being folded during delivery, it has relaxed well and there shouldn't be any issue with use in games.

The buildings are from Cresent Root.  These are excellent pre-painted and assembled buildings that come ready to unpack and put on the table.  The roads are from Deep Cut Studios.  The straight sections of roads are as you see them in the photos.  I trimmed the intersections and corner pieces to match the width of the straight sections more closely.  I do not know the manufacturer of the hills. 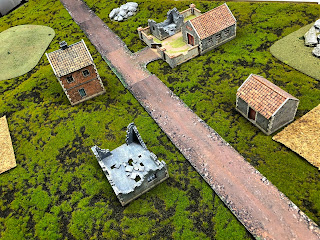 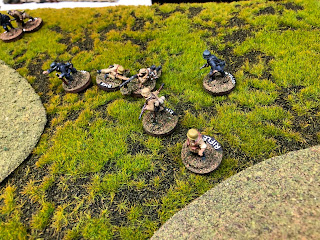 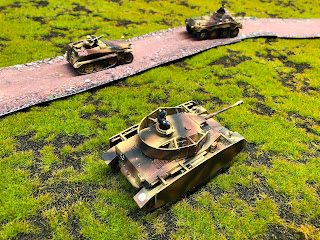 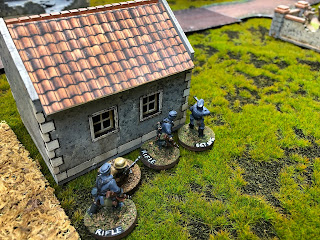 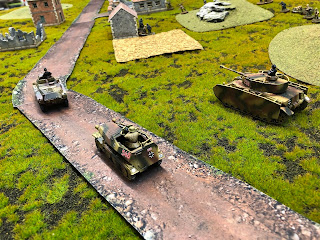 I am looking forward to having actual games on this mat in the near future.
Posted by Mark Decoteau at 22:31 No comments:

Wow!  Where did the summer go?  I haven't been posting, but I have been pretty active on the hobby front.  Getting new units painted up and doing some organizing of the hobby space.  I will be posting several different items to get re-booted on the Blog.  Plus, saying that I am going to post something helps motivate me to get the final bit of paint or decals on the model so I can photo and show you.
Posted by Mark Decoteau at 10:01 2 comments: