Happy New Year!  Here's toasting a great year around the gaming table!  The hobby year overall was a good one with new forces being raised and many a good time with good friends.  I gamed at my house, other's homes, at club game nights and at the Adler Games Cafe.  Very fun wherever I played! I look forward to even more good times in the coming year!

Here is my total of my wargaming activities for 2016.

I have to call this the year of the 28mm WWII armies.  I went for Bolt Action in a big way and right at the end of the year we have discovered "Iron Cross" which seems to have potential for a club game day WWII set-up.  We will have to see.  I'm not a fast painter at all but I think I did pretty well for me.  I have just about all of the Allied forces that I need for both BA and Iron Cross.  2017 will be my year to get an Axis force to get opposing forces on the table!

I really got away from my 20mm armies and games and maybe I can get back to them in the coming year.  I also got away from Napoleonics and War of 1812.  I hope Napoleon's Rules of War is published and we can do some gaming in that genre.

Today I had a chance to play "Iron Cross" for the first time.  I went to the Adler Hobby Game Cafe and got together with Gordon and our friend AJ for an initiation game.  As we were starting - in walked Bob O.!  He ended up joining us for a couple of turns learning the game along with me.  Bob and I decided to play on the same side reasoning that if AJ and Gordon beat us it would be the expected and if we won, it was because of our total mastery of wargaming in general!  Well, at the end of the game Bob and I had not shown our total mastery of wargaming to say the least.  We couldn't even blame it on the Dice Gods as there were very good and very poor rolls on both sides.  AJ and Gordon just used their army better than we did and in the end my French forces fell back in disarray.  Sort of just like the real Italian Campaign.

The game is very simple with only about 15-20 pages of rules including OB's.  A turn consists of each side playing a number of initiative chits with one per maneuver unit (half squad or vehicle) and then two or more for the unit commander.  Once all initiative chits are played the turn is over and the chits are collected up and a new turn starts.

The scenario today was four half squads of infantry, one light tank/recon, one medium tank, one SP ATG, one regular ATG, an MMG team, and a command team, one flamethrower team and one mortar team.  So each side started with 14 command chits.

The game is pretty simple in design but it really puts players in the role of a commander as the management of command chits is so integral to the success of your force.  Do we play more or less chits before passing to the other side?  Do you spend chits to take an opportunity fire shot and prevent an enemy unit from doing something?  Do you pass the initiative to the other side to make them spend at least one chit because they only have a limited number left?  The number of choices to make and the relative advantages and disadvantages of each possibility make it a very interesting game.

This was only the first game, and we have a long way to go before it is our favorite for WWII but the system definitely has some merit and I am looking forward to playing the next game!

Here are some photos of my brave RMLE (Regiment de Marche Legion Etranger) soldiers as they conducted their first operation under the Iron Cross rules.  I have provided comments to each of the photos.

I played in a Bolt Action pick-up game at Adler's Gaming Cafe.  It was the initial battle for my mid/late war French Expeditionary Corps troops.  I wish I had picked a different night and a different opponent to debut the troops against.  I played against Don's "Dirty Germans" and his Falschirmjager made easy work of my troops as I tried to advance into the teeth of his veterans with multiple LMG's, MMG's and a horrifically effective Stug III!

Lessons learned - 1.  Don't bring light vehicles to an infantry urban fight; 2.  Don't hesitate in the face of really good troops - if you are going to die, do it with dignity on the attack!; 3.  At least try to roll one die that kills something during the evening!; 4.  Snipers SUCK!

I didn't take many pics as my troops were not on the board long enough to do anything!  Here are the couple I did take.  I was too busy getting my butt handed to me!

Overall it was a fun game.  Just wish that I had acquitted myself better as commander.  I look forward to getting another chance with them!

Here is a photo of our son, Andrew, 2nd Lieutenant, US Army, graduating from his Ordnance Corps Basic Officer Training Course.  We are very proud of him. Armament for Peace! 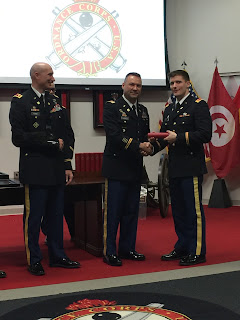