Yesterday, I had an opportunity to participate in a 10-player Bolt Action Game at Adler Hobby.  We we playing a stylized Anzio scenario with five Allied players defending the beachhead against an attack from five Axis players.  Gordon set the scenario in the historical context of the start of the German offensive of Operation Fischfang. This would mean tired Allied units facing strong German units including armor and heavy artillery.  The saving grace for the Allies would be strong artillery units on the beach and a preparatory bombardment called in by a British Forward Observer.  Many of the Allied units would begin the game dug-in giving them the 'Down' modifier while still allowing them to shoot.  The plethora of flamethrower (both vehicle and man pack) in the Axis army would negate most of the benefits of the foxholes, but it would help against other weapons.  Each army was a 750 point base with available extra points/units from the campaign capped at 1000 points.

Here is the excellent beach side of the board set-up by Gordon at Adler Hobby: 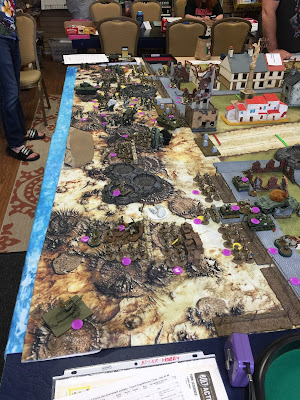 The Allies are on the left and the Germans would advance from the right.  The next photo shows the Axis portion of the board.  Each Allied unit began the game with one pin marker to represent the hard fighting they had already done prior to the start of the German offensive. 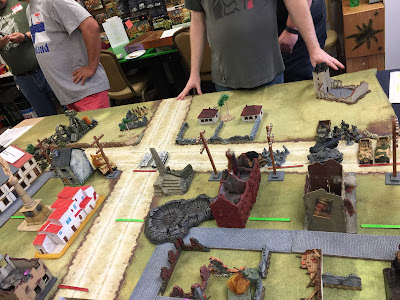 The Axis side of the board including their initially deployment units.


The battle proceeded through the first six turns and the Allies were hard pressed with only a few squads and one Sherman tank left on the beach.  The Axis forces were closing in for the kill!

Then the miraculous happened.  All of the Axis units within range of Allied troops on the beach fired during Turn 7.  It came down to one German command squad firing at the remnants of the last French squad.  Only one rifle was left to shoot and the die was cast.  IT CAME UP A "1"!!!  The French survived!  It was just barely an Allied victory!


This was one of the best games I have played in for a long time.  My hat is off to my Allied co-players and all of our Axis opponents.

At the end of the game Gordon had some really cool awards and raffle prizes.